FOTOTHON : The idea that Clicked.

Fotothon was born out of an idea that FAILED.

I & Virat had put in around 18 months of effort to push forth our grand vision of making ' Walking' ...fashionable.
A Walkathon, to promote walking & a Walkability Index for our beloved Mumbai.
It was to be organised in association with the GOM to commemorate the Golden Jubilee of the state & to be flagged off by none other than the US President, Barak Obama....such a lofty proposition.
The year was 2010 & we could see some light at the end of the tunnel.
On the Environment day, the event was declared in the presence of the Hon. Chief Minister to be conducted in the Month of November-December. Finally our 18 months of relentless persuasion was bearing fruit.
'Finally'..we are set..I told Virat, putting my hand on his shoulder as the short AV of the Walkathon played in the auditorium.
'Obama bhi November mein aa raha hai, on his maiden visit to India' added Virat.
All the circumstances were dovetailing for a grand event in the offing, Golden Jubilee of the state, failure of Kyoto protocol, lower footfalls on the newly opened 'SKY WALKS'& the icing of it all Obama's visit to Mumbai.

But there is always a slip twixt the cup & the lip.

Walkathon.......... which was so certain to happen still remains in the realms of our memories.

The abrupt abortion of our maiden idea took a major toll on our self confidence.After giving 'Walkathon' a silent funeral we went into a self declared hibernation.
But still restless with our badly bruised EGO's we started toying with a  new idea..

Photography competitions till date are conducted in a very typical fashion,................ Declaration of themes & call for entries, a panel of judges, declaration of winners, Prize distribution ceremony.....repeat next year.

Action was lacking in such format competition, also the participants newer had a chance to meet the organizers ( unless he is a winner) nor his fellow participants. Also few participants kept sending their same old winning image in different competitions & sadly........ Winning.
A privilaged few had access to the best of instruments, best locales & of course PHOTOSHOP.

There was no event which brought the Photographic Fraternity togeather in large numbers on a common platform , except ocassional Photo-walks & Photo-Talks.Something which will allow amateurs to mingle with the Pro's in a informal but competative set up.

We had to 'Change the rule of the Game' to make it a level playing field.

So one day we set of to Kanheri Caves, shooting images on the way to brainstorm so that we could ' Change the Game' of Photography competitions.

Location, Kanheri Cave no. 3, after some deliberations sparks starting flying as the idea of a Marriage between Marathon & Photography started bubbling up.

The idea of a time bound race of 8-12 hrs started taking shape where in extempore themes will be declared and a Photo story to be Shot & Submitted.
Why 8-12 hrs, Why not 24 hrs race ? was a obvious question we posed to ourselves.

' Raat ka tension kaun palega', kuch ho gaya to ? Finish it off during daylight, nothing similar has been done before, so we do not know the repercussions.........were some of the logics we were struggling with.
Kya hoga, all the participants will go home after the days shoot, will ponder over the theme in bed or discuss with their families, most of them will get there Eureka moment during that, .....will get up in the morning & with a better frame of mind can capture the winning story.
This logic to some extent alleyed our fears of 'Raat ko kya hoga ?
Also as most motivational speakers say that the difference between the successful & the unsuccessful man is how they use the 24 hrs given to them by God. So every photographer had 24 hrs to make the best of it.

With this FOTOTHON, the 24hrs live Photorace was born, at least in concept.

Posted by fotothonian at 8:43 AM No comments:

FOTOTHON Focus:
Fotothon has decided to go PINK in 2013, the Fotothon focus this year is' Flamingos of Mumbai'.
Flamingo who make their annual trip to Mumbai in around the month of December every year normally are threatened by indiscriminate pollution of the creek and habitat loss. We will highlight information and try to create awareness about flamingoes and what can be done to ensure the pink beauties keep coming to Mumbai during their migration.
Team Ecofolks had decided from 2012 to use Fotothon event also as a platform to spread awareness amongst the photographer community about important issues relating to environment.
During fotothon 2012 the focus was on Leopards of Mumbai. Exhibitions were held at 15 location and over Two lakh people viisted these exhibition and understood about mitigation measures for man-leopard conflict.
Posted by fotothonian at 5:50 AM No comments: 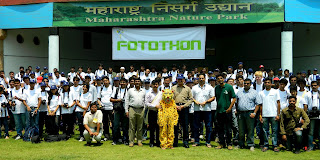 Posted by fotothonian at 12:39 AM No comments:

Posted by fotothonian at 12:24 AM No comments: